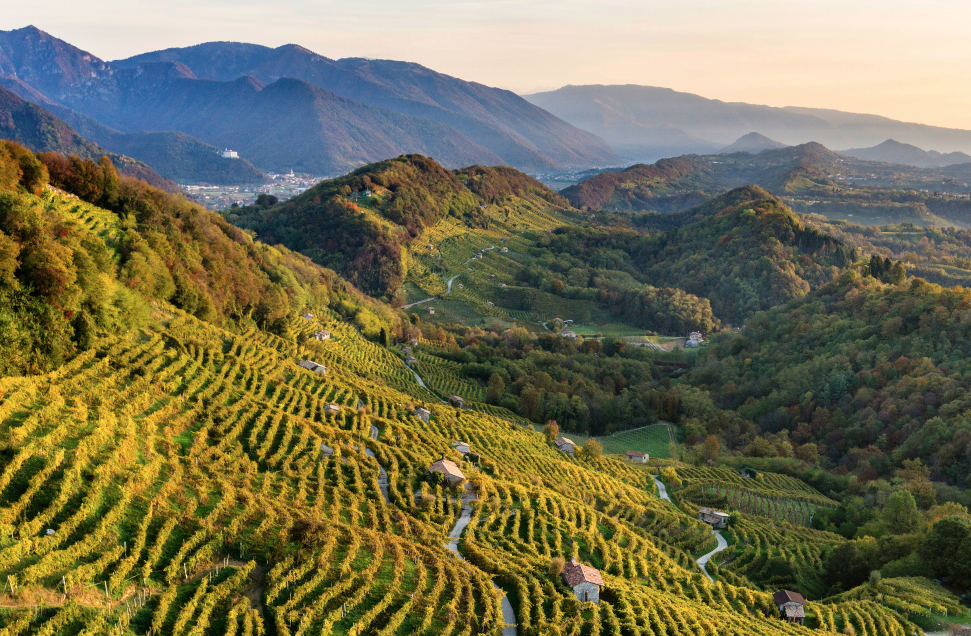 The Venice region is rich (in numbers and quality) of traditional and modern wineries. Today we will focus on a specific area called Valdobbiadene and Conegliano, the Prosecco area right at the foot of the Alps. These stunning hills are only about a half hour drive from Venice, and they are the original location for the only DOCG Prosecco in the world. In 2019 these hills became an UNESCO world heritage site, due to their beauty and their rich history in the production of one of the most popular wines in the world.
Prosecco wine used to be a rather sweet sparkling wine until the 1960s, barely distinguishable from the Asti wine produced in Piedmont. But in the past 40 years the production techniques have improved a lot, leading to the higher quality Prosecco that is produced today. Thanks to its relatively cheap price, Prosecco rose in popularity around the world since the end of the 90s, especially in America and in the UK, where since the mid 2010s it became the biggest export market for Prosecco outside of Italy (taking up to one quarter of its total production).
Since 2009 Prosecco was promoted from DOC to DOCG status, meaning that the original version can only be made in this very specific location: Valdobbiadene and Conegliano. Nowadays you can find both the DOC version , made in a variety of different places around the Veneto region, and the DOCG version.

Prosecco is a sparkling white wine made from an Italian grape called Glera, and it usually aged between 30 days to 9 months in stainless steel barrels, depending on its quality and final selling price. But you can also find the “metodo classico” which entails a secondary fermentation in the bottle.

Prosecco is a perfect wine for aperitif and it can be savoured by itself or mixed with other ingredients, like some worldwide famous cocktails, the most popular being Aperol Spritz (Prosecco, Aperol, soda) and Bellini (Prosecco and Peach Juice). Prosecco is also a very popular wine for events as an alternative to Champagne.

If you want to arrange a Prosecco tour while you are in Venice, don’t hesitate to contact us on Vidal Venice Tours. See you soon!