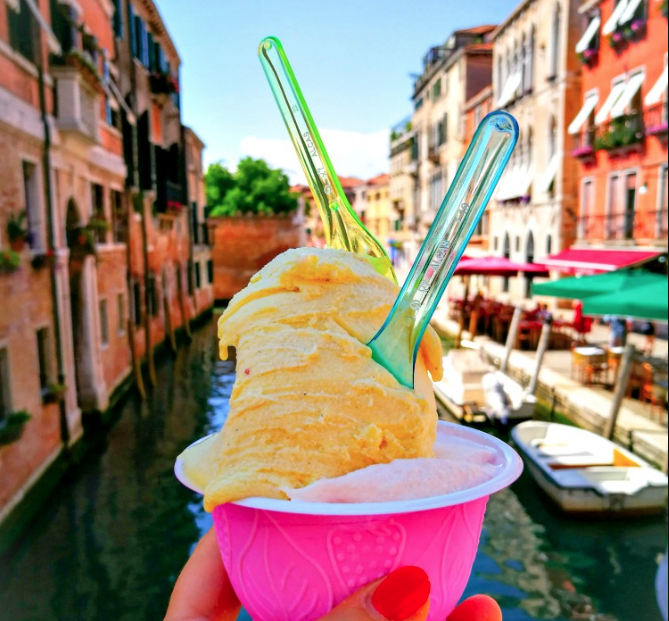 Ice cream, or Gelato, is the most popular frozen dessert in the world. But the Italian version is definitely the best and here is where it was made first.

Gelato was invented by Italian chef Francesco Procopio dei Coltelli in the late 1600s, and soon became a classic in the Italian homes, bars and restaurants.

So while you are in Venice you HAVE TO try some of our best gelato, and that’s why we are here to give you our personal favourite “gelaterie” in our city! Here we go

Gelateria il Doge
This wonderful ice cream shop is located in one of the most beautiful and active squares in the city: Campo Santa Margherita. Here is where all students gather from September to the end of June, due to its proximity to university campuses and its many bars that you can find in each corner of the square. When you visit Gelateria del Doge remember to try their trademark flavour : Crema del Doge.

Gelateria Nico
This is probably the most traditional and famous gelateria among the older Venetian population, as it was founded in the 1920s. It soon became very popular and it is still a must for all visitors who are willing to blend in with the locals. It is located in Zattere, the south side of the main island. Remember to try their Gianduiotto.

Gelato Fantasy
Gelato Fantasy is one of the most famous handmade gelaterie of the island. It is located next to Rialto Bridge, which is at the very centre of Venice. Remember to try pistacchio and cioccolata fondente, as they won the “best flavour prize” in 2013.

Gelateria al Teatro
This very small gelateria is located near Rialto, next to the Goldoni Theatre and they make a succulent artisan gelato, which they also ship to the most luxurious hotels in Venice on a daily basis (such as Danieli Hotel and Londra Palace Hotel). Remember to try cheesecake ice cream, tiramisù and mint-chocolate.

If you want more tips about Venice drop us a message on Vidal Venice Tours. See you soon 😉